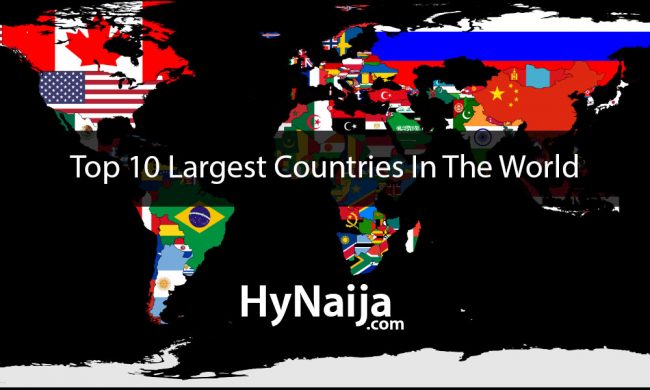 Are you looking for the top 10 largest countries in the world (2022)? The most habitable planet in the solar system – earth, is one staggering place in size.

It is littered with over 200 countries across 8 continents, encompassing different sub-regions, time zones, climes, cultures, races, colour and diversity is almost endless.

However, some countries have seized a sizable portion or perhaps a reasonable chunk of the entire earth’s geographical space under the sun.

These countries are rated largest based on their land size measured in square kilometers.

These largest nations in the world are spread across 5 different continents, namely; Europe, Asia, America, Australia, and Africa.

If you are ready to explore these mammoth-sized nations of the world, then let’s begin.

Without any iota of doubt, the Ru$$ian Federation is the world’s largest country by land area.

So big in size is the Ru$$ian Federation that it borders a total of 14 countries, spanning from Europe down to entire northern Asia and across 9 different times zones.

Ru$$ia is one of the coldest countries with Siberia – a part of the country, permanently immersed in snow.

Canada is the second-largest country in the world and the largest in the western hemisphere.

Canada has a population density of 4 persons per square kilometer and with a minute population of just 35 million occupying the world’s second-largest country, each person in Canada can have 61 acres of land space to own.

This nation has more lakes than all of the lakes in the world put together.

The bulk of Canada’s populace lives within miles of the border with the United States, leaving the entire north as one huge expanse of cold and empty desert.

Just slightly smaller than Canada, its neighbor, America is the third-largest nation in the world.

The border between America and Canada is the longest international border in the world.

America sits on the North American continent, bordered by Canada to the North and Mexico to the South.

America is home to some of the most developed cities in the world and has the world’s longest river; Mississippi.

America, amongst a number of great things, is known as the World Power, has the oldest democracy, and is the world’s biggest economy.

The world’s populated country comes fourth in the largest countries of the planet Earth by land size.

China also shares its border with 14 different countries like R$$sia and is the largest country in all of Asia.

China has unique geography which is vast and lavishly endowed with nature’s best gifts.

It has only a one-time zone despite its size.

Its largest city is Shanghai, while Beijing is the capital.

China is arguably the most technologically inclined clime in the world and a contender with America for World Power.

Interestingly, there are more doctors in China than the entire population of Qatar which is not much of a surprise since it’s the most populous nation in the world.

Known for its colourful festivals, stunning beaches, football ingenuity, and gigantic population, Brazil comes fifth in the largest nations of the world.

It is the largest country in South America and Latin America.

It has the world’s most luxurious and largest rain forest – the Amazon and the Amazon River flows through it.

Its largest city is Sao Paulo while the capital is Brasilia.

The coastline of Brazil is one of the longest in the world flanked by its major cities; Rio de Janeiro and Sao Paulo.

The farthest place in the world and indeed one of the world’s most unique countries comes sixth in the largest nations of the world.

The country is both a continent and a country.

Australia is an island continent, but due to its mammoth size, it’s mostly seen as a continental landmass.

The climate in Australia, for most parts, can be extremely hot and cold.

Its major cities; Sydney, Melbourne, and Perth all lie in the coastal areas because the Australian outback is about the driest and hottest place in the world.

It has a population too small for its size at 22.6 million people, perhaps its bizarre outback and extreme weather conditions are geographical deterrents.

India is the second-most populous country in the world and its position as the seventh-largest in terms of size is a worthy compensation if that actually counts for anything.

It is bordered by six countries and known as the land of rivers for having too many rivers.

Its vast geography ranges from the mind-blowing Himalayan Mountains to the shores of the southern peninsula.

India is home to some of the world’s ancient civilizations.

Interesting fact; the game of chess was invented in India.

Argentina is the second-largest country in South America and the largest Spanish-speaking country on the planet.

It is bothered by four nations; Bolivia, Paraguay, Brazil, and Uruguay.

Argentina has one of the stormiest locations in the world in the Cape Horn at the Southern tip of the country.

This nation comes with rare geography divided into four regions, the Andes, the Pampas, the North, and Patagonia in the south.

The culture in Argentina is rich and the nightlife is vibrant.

This country was the second largest in the defunct Soviet Union after Ru$$ia.

It is situated in Central Asia and Eastern Europe.

It is landlocked, making it the world’s largest landlocked country.

It is bordered by Ru$$ia to the north, China to the west, Uzbekistan to the south, and the Caspian Sea.

Its population stands at just 16 million and the capital, Astana is fondly called the weirdest capital city in the world due to its magnificent architecture.

This is the only African country to make it to the list and by far the largest country on the African continent.

90% of this nation is a desert representing a huge expanse of the world’s largest desert; the Sahara.

Algeria is in Northern Africa, a region best described as the Saharan African region.

It is bordered to the North by the Mediterranean Sea, to the south by neighboring African nations; Mali, Niger, and Mauritania, and to the west by Morocco and Western Sahara; a state yet to be officially recognized.

90% of the nation’s population sits by the coast deserting the Sahara Desert.

Now it’s your turn! Please, What do you think about our top 10 largest countries in the world?