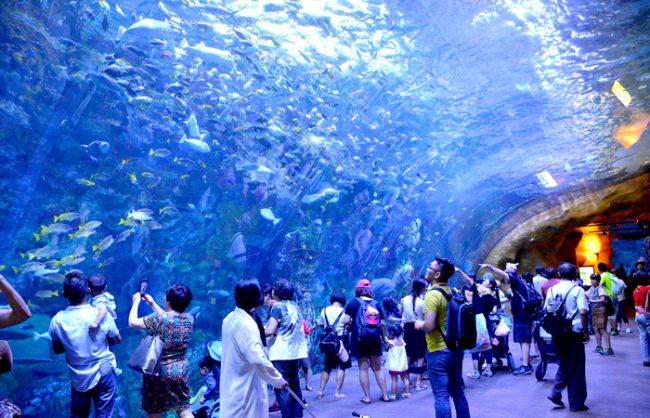 An Aquarium is a vivarium (an enclosed area for keeping and breeding animals outside of their native habitat) with any size ranging from the size of a small room to the size of an entire building or even more with at least one transparent side for displaying the live aquatic animals being bred.

Since first developed in 1853 by Gosse in Victoria England, Aquariums in public places have grown into huge tourist attractions leaving breath-taking views of the rich aquatic splendor beneath the sea to the full glare and thrills of numerous spectators.

Some of these aquariums even take the leisure further by allowing visitors to go along with divers into the in-house aqua life and have a taste of what the marine world is like.

There are so many of these aquariums littered across major cities of the world and we bring to you the top 10 largest, biggest and best aquariums on the planet that would pass for a mini ocean.

This aquarium in China is the largest in the whole of Asia and the world.

It is part of the Chimelong International Ocean Tourist Resort.

It was opened in March 2014 and entertains 9.8 million visitors yearly.

Its total tank volume is measured at 48.8 million liters, but that quantity of water into gallons and be ready to count a whopping 12.9 million gallons of water.

That’s incredible! More to this man-made awesomeness, it comes with 7 different aquatic-themed areas for viewing pleasures, each of these themed areas is emblematic of a unique part of the real ocean.

The Marine Life Park in Singapore is part of the Resorts World Sentosa, South of Singapore.

This monster vivarium is an artificial habitat for more than 100, 000 marine animals in more than 800, 000 species.

These species incorporate hammerhead sharks; some of the rarest species of sharks, manta rays, and other sea monsters.

With a tank capacity of 45 million liters which can give you 12 million gallons of water, this aquarium in Singapore is the second-largest in the world.

This is the largest aquarium in all of Europe.

Serving as a unique habitat to over 45, 000 marine creatures in more than 500 varied species, the oceanographic attracts tourists from all over Spain to Valencia and could be topping the charts for a list of popular tourists attractions in Spain.

With a total tank volume capacity of 42 million liters and equivalent to 11 million gallons of water, the oceanography comes third as the largest aquarium in the world.

Sited downtown Atlanta, Georgia, this magnificent aquarium has a tank volume of 38 million liters which can fill up 10 million gallons of water comfortably.

This aquarium uniquely stands out as the home to the largest number of sea animals outside the ocean in the world.

It is also the only institution beyond Asia to contain whale sharks which are housed in a 24 million liter tank.

In the heart of the Russian capital of Moscow sits this mammoth public aquarium with a tank volume capacity of 25 million liters that’s about 6.6 million gallons of water.

It is easily known as the largest aquarium in the Russian Federation.

It is a pleasant sight to behold as visitors are met with the wonders of what lies beneath the sea.

Visitors who wish to tour the aquarium are granted such with a fee attached and a tour guide.

If they want to make a small replica of what they are seeing, a store provides all that for them and of course for a price.

In 1986, one of the world’s most prodigious man-made underwater confines for recreation was built and launched as the Living Seas.

It was later renamed The Seas with Nemo and Friends forming part of the Epcot theme park in the Walt Disney World Resort, Florida.

The large tank housing its crop of aquatic splendor is measured at 22 million liters, enough to fill up 5.7 million water gallons.

It is a dark ride attraction that has the capacity of having 2,200 riders per hour.

This man-made wonder is still one of the biggest in the world.

This is the oldest aquarium on the list having been launched in May 1930 as the Shedd Aquarium.

The aquarium is located at the Museum Campus, Chicago on Lake Michigan.

With a tank volume of 19 million liters (4.2 million gallons of water), the Shed Aquarium is still one of the largest the world’s ever seen.

It was also once the largest and biggest indoor aquarium in the world and the premier inland aquarium with a permanent saltwater fish collection.

This is the first and only African aquarium on the list.

As a thumb rule, it is unarguably the largest aquarium in the African Continent.

About 10, 000 numerous sea animals call this aquarium their home, from rays, sharks, dolphins, and sea horses, the sight is everything fantastic.

Opened in April 2004, the structure of the aquarium is made to resemble a rustic wreck, plus numerous restaurants and cafes where one can sit, eat and enjoy the view.

It has 8 sections of the marine world. 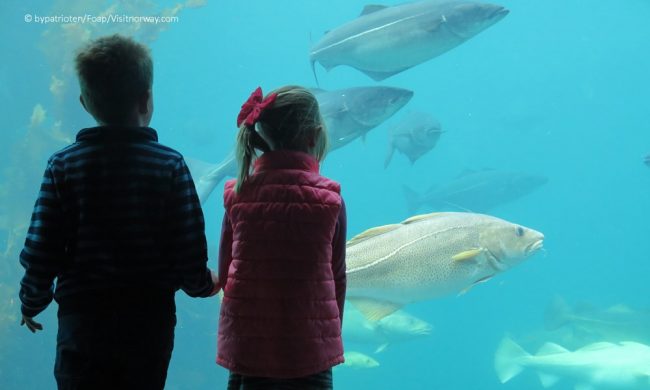 This aquarium is quite unique in the sense that, with numerous installations, the Atlantic sea park that houses it, sheds light on the vivarium right from the inner fjords to the open sea.

There isn’t just one aquarium made available for visitors, the park has a compendium of more than 20 aquariums displaying various scintillating sights of aquatic endowments.

The largest of these aquariums have a tank volume capacity of 15 million liters equated to about 4 million gallons of water.

The largest aquarium in all of the Middle East has a tank volume capacity of 11 million liters enough to fill up 2.9 million gallons of water.

It is situated in the deluxe Dubai hotel Atlantis.

The aquarium is named; The Palm, Ambassador Lagoon and serves as a unique habitat for more than 65, 000 sea creatures in a variety of over 250 species.

Lodging in the hotel Atlantis entitles you to a crisp clear view of the man-made aquatic wonder via glass walls.

What do you think about the world’s largest, biggest, and best aquariums?