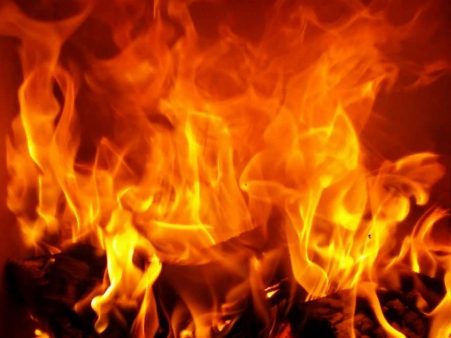 A fire outbreak that occurred at Umuoffor village Okija in Ihiala local government area of Anambra state has led to the death of a pregnant woman and her two children.

According to report the victims were trapped in the inferno and burnt beyond recognition.

READ ALSO: INEC Tells Okorocha Not To Live In A Paradise Of Fool

The Police Relations Officer in the state, Haruna Mohammed, who confirmed the incident stated that the cause of the fire outbreak has not been ascertained.

“There was a fire incident at Umuoffor village, Okija, at the residence of one Maxwell Okeke. As a result of his pregnant wife named Nwazuru Okeke, ‘f’, two children namely Chidi Ebube Okeke aged two years and Makuo Chukwu Okeke, ‘m’, aged one year, were trapped in the inferno and burnt beyond recognition,” he said.

He stated that the scene of the incident has been visited by detectives attached to Okija Division.

The fire was stopped with help from local volunteers in the area.

Mohammed said that the Commissioner of Police, Mr. Rabiu Ladodo, has ordered a full-scale investigation to ascertain circumstances surrounding the incident