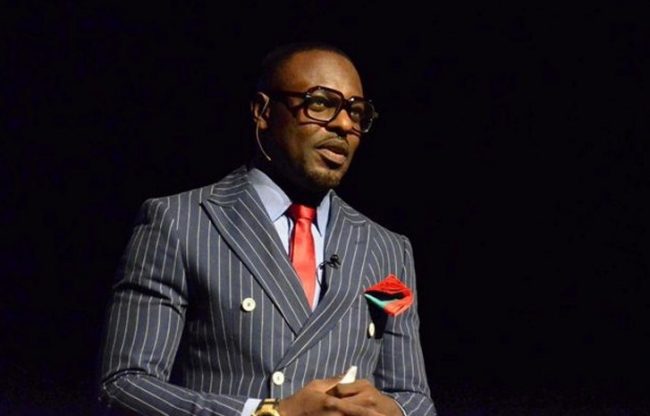 The actor is extremely stylish and has a great fashion sense.

He’s the bad boy of Nollywood judging from his numerous roles of romantic entanglements with ladies where they drool over him as he displays all the alpha male characteristics.

Jim Iyke is a household name in Nollywood because he carved an acting niche for himself and so when the cast of movie pops up on your screen and you see the name Jim Iyke, you just know you are in for some romantic movie filled with slangs coming from him of course and heartbreak cries for the ladies precipitated by the Bad Boy himself.

He rarely plays the role of a humble gentleman filled with courtesy and morals, his rascality and knack for making the ladies fall for him with heartbreak as the end point is his selling point.

This has created a perception amongst his fans and the Nigerian entertainment audience that his roles on screen were actually a reflection of his true self.

To further lend credence to the generic perception, Jim Iyke was immersed in some controversy that saw him being delivered by a popular pastor in Nigeria.

The video went viral and Jim had his own share of the pain that comes along with the fame.

Recently Jim Iyke has been off the acting scene and into some private business.

Let’s take a look at the profile of one of Nollywood’s most distinct character that’s hardly civil with words and could even woo a girl while a plane is about to crash.

Jim Iyke by birth is a citizen of Gabon.

He was born in the capital of Libreville on September 25, 1976, to Nigerian parents Mr. and Mrs. Stephen Okolue who later changed their last name to Esomugha.

By descent, Jim Iyke is from Ogwugwu village in Enugu Agidi town of Anambra State, Nigeria.

He happens to be the sole male child of his family of eight.

He had his primary education outland in Gabon and on migrating back to Nigeria, he enrolled at the Federal Government College, Kwali, Abuja.

On completion of his educational stint in Abuja, University of Jos, Plateau State became his next port of call.

He subsequently bagged a degree in Philosophy and a Diploma in Banking and Finance from the University of Jos.

Jim Iyke kick-started his acting career in 2001 and began featuring in a couple of movies until he gradually metamorphosed into a star and began starring for Nollywood.

Today, he is among the A-list actors in Nollywood even though he’s been off the radar for quite while doing his solo thing.

Jim Iyke since his debut into the Nigerian movie industry has featured and starred in over 150 movies and is amongst Nollywood’s highest-earning actors.

Most of his best works can be seen in the movies “Last flight to Abuja” which was a major blockbuster, “1 Dollar” and “games men play”.

Jim Iyke also took to producing movies and so far his movie productions have been fantastic and have raked in income for him.

His movie productions are usually done ashore especially in London.

The movie “1 Dollar” and “2 Dollar” where his productions including shades of white.

Perhaps shooting and acting movies could actually make one go bored for a while which is why most prominent actors and actresses in the Nigerian movie industry have veered into music for a short stint only to return back to acting and their music career becomes a tale of career switching gone wrong.

Jim Iyke is one of such actors who ventured into movies.

In 2007, he launched his own movie production company with the identity “Untamed”.

The label was fruitful in the release of an album.

The lead single of the album was “Who am I?” and he featured Nigeria’s music living legend Innocent Idibia popularly known as Tu Baba.

The debut album of the label imprint also had Sound Sultan as a featured act.

Jim Iyke is yet unmarried but has been linked to some amorous relationships with very pretty and classy ladies.

Notably of them was his romance with the jaw-dropping Nadia Buari, a Ghanaian actress.

Their relationship was heavily flaunted by the lovebirds in social media and fed blogs with juicy gossips while it lasted.

Jim Iyke even went as far as proposing to the screen goddess who accepted the proposal.

However, their romance was short lived as it headed for the rocks making speculations go rife about the whole romance being a mere publicity stunt.

At the moment, Jim Iyke has hooked up again with a pretty young lawyer, Dana Kindurte from Lithuania.

While Jim and his partner are yet to tie the knots, they’ve produced an offspring, a son, Harvis Chidubem Iyke in Atlanta, U. S. A.
Asides romance, Jim Iyke is a black belt holder in Taekwondo.

He lives a luxurious lifestyle with flashy cars and a multi-million dollar mansion in Abuja to call home.

In a bid to fix the wrong perceptions by his fans and the general public about him due to his roles in movies, Jim Iyke launched the “Jim Say So” reality TV Show on DSTV in 2013.

The first season aired for 13 weeks.

Probably the break from the screens was to focus squarely on his business.

READ ALSO: How To Invest In Treasury Bills In Nigeria (Helpful Guides)

Recently Jim Iyke has transformed into a serious-minded businessman.

Some of his investments are his clothing line, Untamed Cars, Mr Taxi, some real estates investments, Burgeon Global enterprise, etc.

This wraps up our Jim Iyke biography, wife, movies, family!