Eldee Call Out Olu Maintain For Performing Their 2008 Collaboration

Popular Nigerian rapper, Eldee has called out Olu Maintain for performing his songs “like he created them”.

Eldee in the caption which he has now deleted wrote,

“This shameless nigga goes out on stages performing my songs like he created it. I still remember how he tried to steal the record right after I put him on it, forcing me to put it out prematurely. Nigga ran off with the unmastered draft and went to print CDs with himself as the lead artist, even his verse was written by me. Lesson to all young artists, don’t ever do pity features.”

Some rappers in the music industry have stepped in, Ice Prince while speaking on the case stated that featured artists should be allowed to perform and promote a song except a contract was signed otherwise. He said;

“I remember this record was promoted as an Edee Da Don Featuring Banky W and Olu Maintain Record… I believe any of the artiste/producers/engineers/managers behind this project has the right and should be allowed to perform/promote the record #BigBoy on any and every platform at whatever time given, expect if deals were signed that contradicts or says otherwise…this is what keeps the record alive and the legacy forever BOSS” 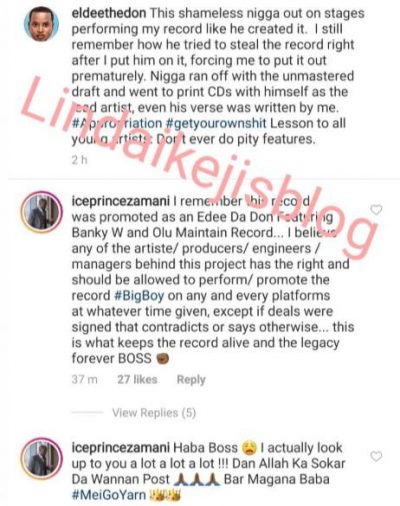