Abe Condoles With The Family Of Late Music Icon Prince Jerry Deemua, Calls On Rivers State Government To Join In Celebrating Life Of The Deceased 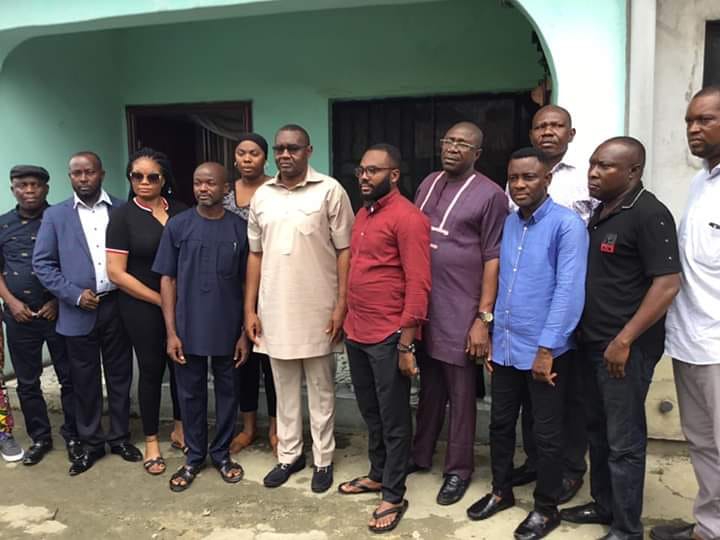 The Most Distinguished Senator Magnus Abe, Senator representing Rivers South-East and Chairman, Senate Committee on FERMA has called on the Rivers State Government to actively join in the celebration of the life and times of late music maestro, Crown Prince Jerry Deemua.

Abe made the call today when he paid a condolence visit to the family of the late music icon in their Port Harcourt residence.

Crown Prince Jerry Deemua is the legendary music star who sang the timeless classic ”E KUE A BEE”, the celebrated highlife rendered in Ogoni dialect that is known all over the world. The song, crafted in the eighties, has remained one of the most powerful and moving renditions coming from Africa till date and has continued to influence music lovers all over the world it is artistic and timeless beauty.

Jerry Deemua died months ago at the age of 68.

Speaking during the condolence visit, Senator Abe said that Jerry Deemua’s songs influenced his own life as a young man and the lives of many others through the message of hope and faith in God which were the themes of his classics. The songs evoked positive feelings that no matter how things were difficult at the present, the future would always be better.

The Senator however regretted that in this part of the world, contrary to what obtains in other climes, artists are not celebrated and they are often on their own no matter how they impact the society through their genius.

He consoled the children to be strong, stressing the passage of Crown Prince Jerry Deemua followed the natural course of events that children would be alive to bury their parents. He said in their lives exist the living spirit of the late music star and that they should be glad that their father impacted his world through his art. The Senator promised to stand with the family through this period of pain.

Senator Abe also called on the Rivers State government to celebrate the life and times of Crown Prince Jerry Deemua because through his music, he was a good ambassador of Rivers State and should be remembered especially now that the Rivers State Governor has said that he would run a government that will benefit and remember all Rivers people.

Members of PMAN Rivers State chapter led by their leaders Arthur Pepple and Lady I.B received Senator Abe at the home of the deceased.

CLOSE UP: 310 Nigerians killed in May – Report
Adamawa Governorship Election: INEC Declares Umaru Fintiri As The Winner
SCAM! EFCC Nabs Kwara Lawmaker Elect, Promises To Pay Back When He Receives Wardrobe Allowance From Assembly
Emir Sanusi May Be Suspended As Ganduje Queries Him Over Misappropriation Of N3.4 Billion