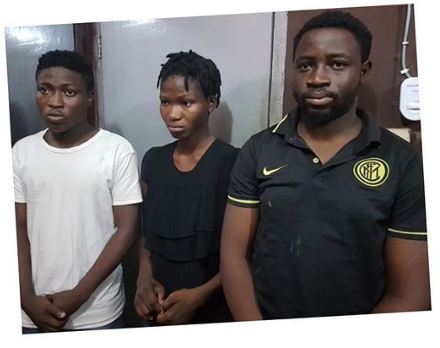 Report has it that the Nigerian Police Force arrested the personal assistant to Nollywood actor Yinka Quadri, Lawrence Oyedokun for allegedly defrauding victims by disguising as King Sunny Ade.

The suspect was reported to have created a fake Instagram and Twitter accounts with the handle @kingsunnyademusic, where he advertise fake U.S and U.K musical tour.

Further report revealed that Lawrence Oyedokun defrauded many people to the sum of millions.

Those that were arrested in respect to the crimes include Lawrence Oyedokun, his girlfriend Rebecca Oyebode, and his friend, Oyewunmi Abiodun Ridwan.

More report has it that the suspect cleared his boss, Quadri of any involvement in the crime.

“People were always calling my number that they heard I was organising a tour. When it was getting too much for me, I had to call the police who helped me.”

“People were thinking I was the one doing it, and I’ve never done anything like that in my life. I’m a law-abiding citizen of this country. I came to the CP and he promised to investigate.”

Why will anyone want to vote for Buhari again – Davido
Controversial Monarch, Oluwo Of Iwo Involved In Alleged S3x Scandal With Cleric’s Wife
Reekado Banks And Tolani Otedola Sparks Dating Rumour
PDP Speaks On Appointment Of Leadership In The National Assembly
Yinka Quadri 1