Yaw Loses Property Worth Millions Of Naira To Fire Disaster 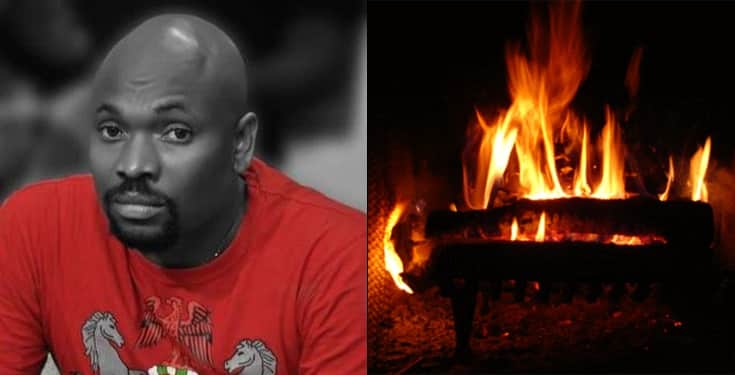 Popular Nigeria On Air Personality, Yaw, saw his house which was located at an estate in Victoria Island, destroyed by fire.

The OAP’s properties running to millions of Naira was destroyed in the fire accident.

Report into the incident has it that the cause of the fire outbreak was a surge in one of his air conditioner.

Further report revealed that he was on his way to office when he noticed that his air conditioner had been caught by fire.

The fire was stopped through the aid of some neighbours who brought out their fire extinguishers, but the fire had destroy somethings in the house.

Yaw was in the news last year after it was reported that he had disagreement with Runtown because he did not perform at his show.

While speaking on the alleged rift with Runtown he stated:

“The truth is I don’t pay attention to social media. I was just having a conversation with my friends in the studio and we were doing ‘Instagram live’. If you had listened to the footage well, you would hear Runtown’s song playing in the background. If I still have issues with him, I wouldn’t have played his song. He sent me a message on Wednesday morning after seeing the video and we spoke.”

“I have enjoyed great support from Nigerian artistes. But I called Runtown three years ago and he said he was not available. When I told him two years ago, he still claimed not to be available. But for last year, he promised he would come if he was in town.”

“On the same day, the Lagos State Government held a concert at Bar Beach. He attended and lodged at Eko Hotel. Humble Smith performed at Bar Beach too but still came to support me. I expected Runtown to show me support and leave.”

“When I saw his car, it was normal for me to feel bad. But afterwards, I forgot everything. I don’t think anyone has played Runtown’s song, Mad Over You, like I did. If you know me well, you will know I don’t have time for things like this. One what I wanted to do and I have moved on,”.

Betty Irabor Speaks On His Experience With A Job Seeker
Tiwa Savage is not s*xually attractive but beautiful – Naira Marley
10 Best Rap Albums I Listened To In 2018
WOW! See what winner of Big Brother Naija will enjoy
Yaw 1