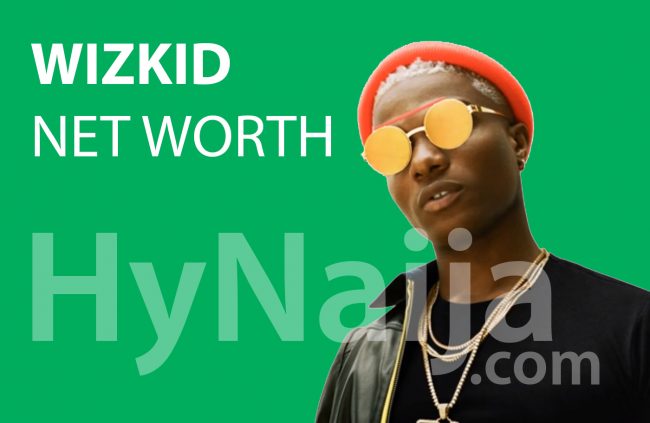 Are you looking Wizkid Biography, Net Worth, Birth, Family, Quotes and Education? One of Africa’s finest voices and eminent entertainment bigwigs comes in the distinguished persona of Wizkid, real names; Ayodeji Ibrahim Balogun. Naturally, he is a household name this side of the world and a name that would definitely ring a bell beneath the distant skies of the western world.

Wizkid’s net worth is estimated to be approximately $22 million – ₦8 Billion as of 2019; He is one of the richest music artists in Nigeria and in Africa which is why in this article, we’ll shed light on his worth and that incorporates his total net worth (both in dollars; the universal currency and in Nigerian naira), deals, businesses, cars, houses and much more.

But first, let’s take a concise peek at his background.

Young Balogun was birthed into an interfaith household in July 1990, in Surulere, suburban Lagos. Interfaith in the sense that his father was a staunch Muslim while his mother was of the Christian faith.

As akin with Islamic paternity, his father had three wives that ministered to his needs, including the birthing of 12 other children, leaving Wizkid with a dozen siblings, mostly females.

After this was termed successful, he then proceeded in the bid to earn himself a degree to the Lagos State University (LASU) where he called it quits before it ended to chase his dreams in music.

If dropping out of school was by any means employed as a yardstick to measure success in the industry, then Wizkid was a perfect model cause he even attempted to give schooling another shot, this time at Lead City University; a private university, but he failed to see to the end and dropped out again in his second year.

He is yet to give schooling another chance ever since.

Perhaps it’s not just his thing.

How He Got His Start

The colossal musical figure of the sensational act began when he could barely fend for himself at age 11.

His love for music at that age couldn’t be masked while he sang in the local choir of his church which his mum never failed to tag him along when attending.

At that tender existence, he recorded his maiden album in a merger with the Glorious Five; a music group he co-founded with some close pals in his local church.

At this time, he was bearing the stage name, best referred to as pseudonym: Lil Prinz, from this name, he became known as Wizkid.

At the budding stages of his career, he met one OJB Jezreel; a renowned music producer who barred him from recording further songs for a whole year, presumably OJB wanted him to groom himself properly in the act before hitting the studios again.

Under OJB’s mentorship at PointBeat Studios, young Wizkid was inspired by 2Face; a Nigerian music legend, sound sultan and other music acts who would usually come around to record songs that rocked the airwaves in the good old days.

Thus, petite Wizkid would pen a deal with Banky’s Empire Mates Entertainment (EME) and that set the stage for him to snowball into international critical acclaim with prodigious albums like Holla at Your Boy (2010), Superstar (2011), Ayo (2014) and Sounds from the Other Side (2017).

Ever since that platform for him to rise for set by EME, he has stayed relevant in the music industry, dishing out hit tracks and albums, season after season.

His awards too flowed ceaselessly with an international perk, collaborations, endorsements and every perk associated with being famed in the music industry of Africa’s most populous nation and entertainment capital of the continent.

Sometime in 2012, the Nigerian entertainment rumor mills began churning out clues and news about an ongoing face-off between Wizkid and the management of EME records which includes his boss: Banky W, Segun Demuren and Osagie.

The crux of the disagreement was hinged on money and the sharing percentage amongst the crew, especially who goes home with the biggest largesse.

As events unfolded, rumors turned into facts and in August 2014, Wizkid; EME’s biggest asset, export, and front-man severed bonds with Banky W following the release of his second studio album.

His departure wasn’t void of controversies as the media went awash with varied versions of the real gist.

Prior to his exit from the EME, Wizkid has already established his own label imprint with the name: StarBoy Entertainment in 2013 while steaming for the exit.

How much money is Wizkid worth?

As of 2019, Wizkid’s net worth is $22 million. The ‘Starboy’ as he is fondly called has done pretty well for himself.

He has since gaining entry into brisk dazzling stages of global relevance, amassed a staggering fortune estimated at $22 million, that’s about ₦8 billion in parity with the Nigerian Naira.

Looking at back at where he kicked off, one can only picture an inspiring narrative of grass to grace occasioned by talent, hard work, association, and diligence.

As a caveat, his net worth is an accrued estimate of all his sources of wealth put into consideration and not exactly definitive of what He’s worth.

This is because rich Nigerian entertainers with a net worth that are Forbes worthy are quite conservative about their financial details. Assets declaration are mandatory for only public office holders, it’s entirely on a voluntary basis for entertainers.

How He Rakes His Fortunes?

Like earlier stated, his net worth is the sum total of his streams of income and the subheadings below will simplify them.

As a reward for his profound music prodigy, Wizkid has attracted a couple of endorsement deals to himself running into excesses of millions of dollars. Some of his deals include;

2013: He inked a deal with Africa’s leading telecom giant; MTN Nigeria for an undisclosed amount.

2013: He yet penned a deal with beer legends; Guinness for the “Guinness World of More” concert at the Eko Convention Centre, Lagos.

2015: While 2014 suffered a draught of endorsement deals, 2015 cured it with a deal from Nigeria’s indigenous telecom giant; GLOBACOM worth ₦128 million. Subsequently, that of MTN became history.

2018: A deal with American Vodka Company, Ciroc reportedly worth $900 million.

Some other minor deals that had crowned him a brand ambassador for Nike and another world famed fashion brand D&G has seen his fortunes climax exponentially.

Live Performances and Sold Out Concerts

As one of the most sought after entertainment aficionados this side of Africa, demands for his services are alarming and he’s quite steep in pricing.

Getting him to grace any stage for his usual sublimely performances would have to drain the pockets of whoever is paying to the tune of between ₦3 to ₦5 million.

When he began this journey into fame, he was reportedly performing in three shows every week and enriching the EME crew with about ₦24 million monthly.

That was during his days under the EME, one could assume how much he makes monthly now he is the boss of his own career and CEO of the Starboy brand.

And then his sold out concerts where tickets are exhausted even before the shows commences, all see his bank account beam with brilliant smiles.

Notably of these shows include the “Wizkid sold out AfroRepublik concert” held at the magnificent 20, 000 capacity theatre of the London O2 arena in May 2018.

Earlier on, he created a similar feat with the 5,000 capacity Royal Albert Hall in London.

In these feats, Wizkid registered his name boldly in the hall of fame of African artist who has sold out concerts in territories abroad.

Parting ways with his former boss Bankole Wellington A.K.A Banky W also served him a plate of blessing.

He floated his own label imprint in StarBoy Records and began coasting to serious wealth.

The following acts are signed unto his imprint.

The trio of R2Bees, Efya, and Mr. Eazi was signed in together into Starboy Entertainment.

This was disclosed by Wizkid after his performance at the 17th edition of the Ghana Music Awards.

Efya and R2bees are of the Ghana entertainment extraction while Mr. Eazi is a Nigerian with deep roots in Ghana.

These acts are by no means misfits or underdogs in the music entertainment scene in Nigeria.

Other streams of Starboy’s income include; album sales, music tours, ad revenues on YouTube and the sales of his songs on iTunes.

As one of the richest musicians on the continent, Wizkid has a lot to show for in terms of his investment and asset base.

He has acquired a substantial fortune for himself as an entertainer and a part-time investor.

All of these will be revealed in the subheadings below.

In August 2018, Wizkid launched his own fashion brand and dubbed it “StarBoy Collection”.

He unveiled this clothing line in Manhattan, New York, U.S.A, amidst a little fanfare that included his musical renditions to a few fans who turned up to witness the launch.

The collection consists of a Starboy-branded tour jacket and a “Made in Lagos” green and purple tee-shirt.

His clothing line was similarly launched in London as StarBoy Merch with the shirts branded “Ojuelegba” where he was born and breed and “Made in Lagos” to particularly reflect the Nigerian origin.

This collection of His was also launched in Lagos, Nigeria same year.

For shelter, the Afrobeat act prefers luxury castles which is understandably necessary.

His Lekki mansion is worth ₦68 million.

He also has a home in Surulere worth ₦13 million.

Ashore in the United States, he has a castle in Los Angeles, California’s largest city.

This led to an online duel between both celebrities, as Wizkid got pretty pissed at Linda for meddling into his private affairs.

The value of his Los Angeles home is unknown, but for someone his caliber and considering the mammoth size of the mansion made up of three floors, furnished to taste and a state of the art pool, your guess is as good as mine.

Rumors have it that he owns a high priced mansion in Banana Island, an enclave for the high and mighty, also revered to be the most expensive neighborhood in Africa.

The singer is yet to clear the air on this asset of his.

As a lover of wheels which he rarely sees as luxury but necessity for his business, the star act has the following cars in his luxury fleet. 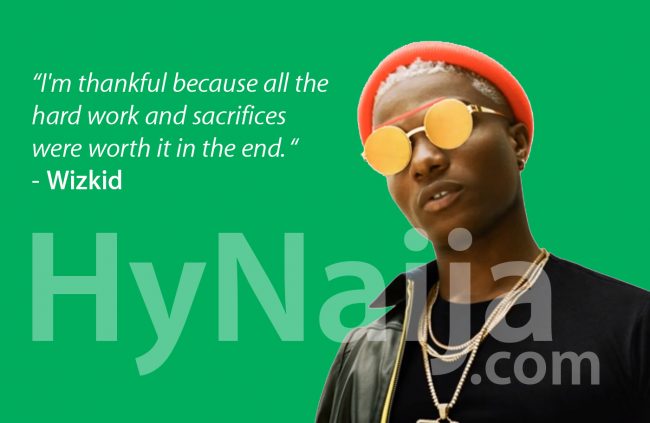 I’m thankful because all the hard work and sacrifices were worth it in the end. 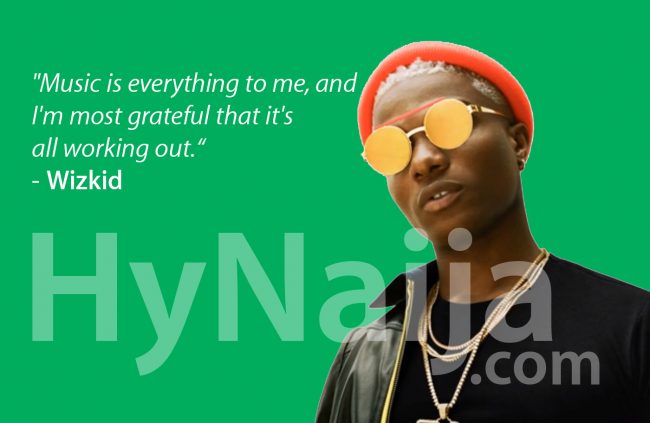 Music is everything to me, and I’m most grateful that it’s all working out. 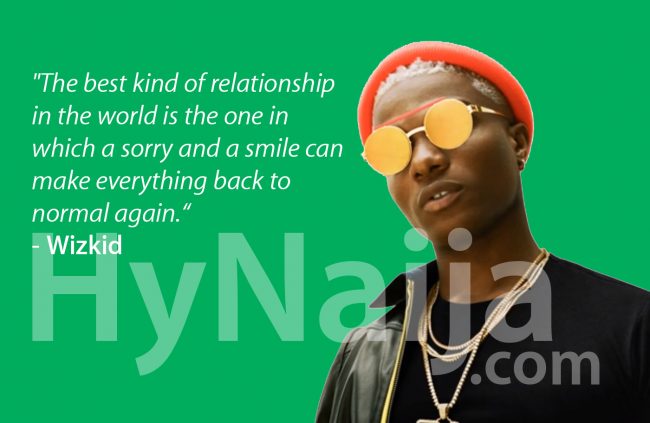 The best kind of relationship in the world is the one in which a sorry and a smile can make everything back to normal again.

Summary of Wizkid’s biography & net worth

Wizkid’s net worth is assessed to be approximately $22 million, and there’s no uncertainty that this sum will keep on expanding throughout the following couple of years.

What do you think about Wizkid’s Biography, Net Worth, Birth, Family, Quotes and Education? Leave a comment below.