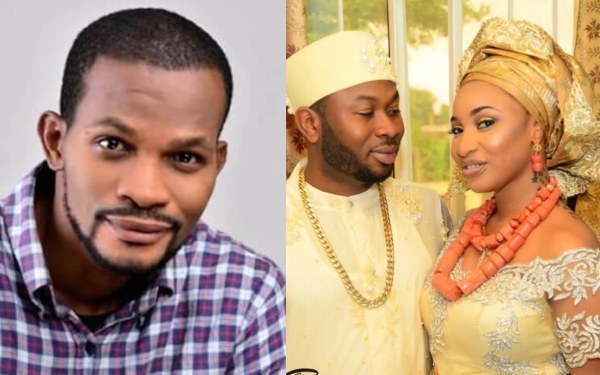 Olakunle Churchill, the husband of Nollywood actress, Tonto Dikeh in a recent interview revealed how he meant his estranged wife.

Nollywood actor,Uche Maduagwu  has reacted to Churchill’s recent interview and shared some words of advise with him.

When Churchill was asked to confirm if truly he squatted in Tonto Dikeh’s house, he said:

“You mean squatting? This is ridiculous. Before I met the Nollywood actress, Tonto Dikeh, I was already one of the most successful young millionaires in Africa. I met her at a night club, during my brother’s birthday party in 2014 and it was about the same time I acquired the latest Benz cars.”

“Three months after we met, she got pregnant. I have never really stayed in Nigeria for too long, because I do business in Ghana, although I have an office at Ikoyi. She visited me in Ghana several times and when she broke the news of her pregnancy three months into the relationship, I decided to visit her in Nigeria. I had to visit her often because she was carrying my child.”

“I have never squatted or lived with her and the only time we stayed together was after the birth of my son, which came with the approval of her parents, after I had completely satisfied the traditional requirements for her dowry. I flew her to the United States to deliver my child in one of the best hospitals in America.”

“She stayed at my family house in London few months after delivery, before she returned to Nigeria. On her arrival, I had already prepared a well-furnished exquisite apartment for us – this was the first and only times we lived together until the divorce. We only lived together for six months.”

“Still on the issue of squatting, it will interest you to know that Tonto will never marry or date a man who lacks prospects or is unsuccessful. She likes to live the life. We broke up in 2016 at a house I newly acquired for my mother in Lekki, Lagos State.”

“Our marriage was plagued with several frivolous claims of falsity, ranging from domestic violence to false allegations and all what not. I never laid my hands on her. I have never done that in my life before. She made up those things to discredit my philanthropic works. I am from a proper disciplined Yoruba home.”

Uche who reacted to the interview stated that a man can not find a wife material in a night club, which he believe was churchill’s mistake. He wrote:

“@olakunlechurchill God is teaching you a RADICAL lesson, there is no God fearing WIFE material in a night CLUB… Sir, not all that glitters are GOLD oh. Its a common saying that “a woman you meet in a night CLUB is not GOD sent, but PARTY sent,” its OK, for a man to once in a while ESCAPE from the busy and hectic work schedule of the week to party and have FUN at the club, but you also must have it at the back of your mind that you’re in the club to DANCE and have fun, but not to look for a WIFE, thus, any man who eventually go into a relationship with a woman he meets at the club should be prepared for unlimited DRAMA, in fact, worse than that of Nollywood films because in due TIME, such a woman is likely to go back to the club spiritually or even try to RUBBISH you when the relationship is over.”