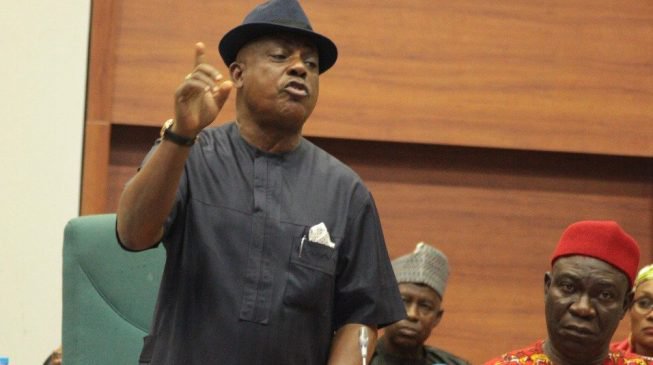 The National Chairman of the Peoples Democratic Party, Uche Secondus in a statement released on Friday raised allegation against President Muhammadu Buhari’s administration.

He claimed that the President’s government forced the Independent National Electoral Commission to tamper with the result of the Presidential and National Assembly elections.

The PDP chairman stated this during press conference entitled “Do we still have a government?” at the party’s Headquarters in Abuja.

He further stated that there are no evidence that the president in charge of the affairs of Nigeria.

Secondus stated that the President directing this country has caused the country more harm than good.

“The apparent incompetence of the ruling All Progressives Congress, APC, in the handling of affairs of governance has continued to take a huge toll on the nation. The security situation has been such that prominent Nigerian clerics have been raising serious concern on the issue of leadership, even questioning whether we really have a Commander-in-Chief in this country.”

“While the Presidency continues to argue that there exists a government in our country today, what obtains in reality is different. The level of bloodletting occasioned by the barrage of criminalities across the country can only be happening in a country without government.”

“Things got even worse as the remaining goodwill of the people on this government vanished after it arm-twisted the Independent National Electoral Commission, INEC, into tampering with the will of the people in the February 23 Presidential and National Assembly Elections.”

“There is no evidence of the presence of government in this country as crimes of all kinds are committed all over the country and Nigerians have never lived in such great fear and trembling for their lives.”

PDP Accuses President Buhari Of Planning To Rig Supplementary Elections
Per the Deaths of 100 Soldiers, President Buhari Must Break His Shameful Silence
Nigerian Universities To Get N208 Billion From FG
2019: No One Can Unseat Me – Buhari
Muhammadu Buhari 89 PDP 77 Uche Secondus 2