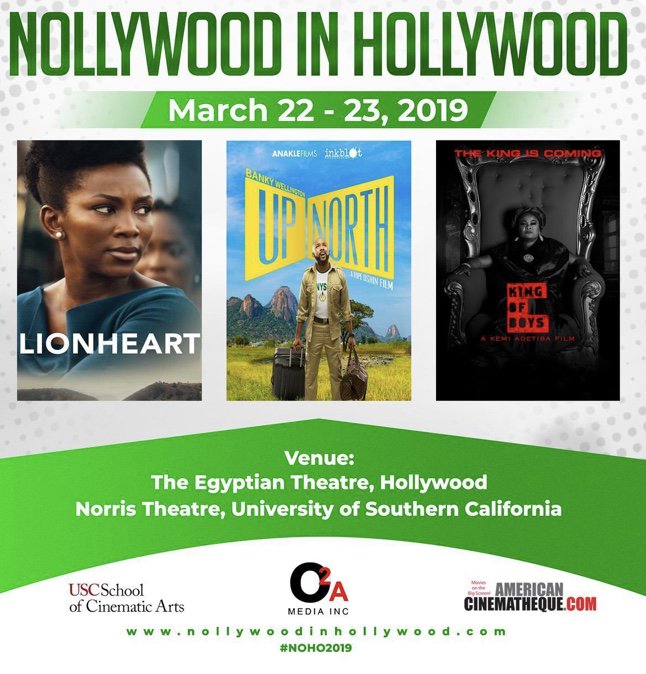 The second edition of the Nollywood In Hollywood event which is expected start today has picked  three great movies Lionheart, King of Boys and Up North  for screening

This online platform learnt that  the showcase will also  features screenings, networking events and parties.

The event is expected to kicks off with a panel discussion about current trends in ‘Nollywood’, followed by a screening of ‘LIONHEART’, the directorial debut of Nollywood actress Genevieve Nnaji, who also co-wrote and stars in the film.

The showcase will close with a screening of KING OF BOYS, the sophomore feature by Kemi Adetiba, whose 2016 debut film, ‘The Wedding Party’, made limelight to become the highest grossing Nigerian film of all time.

Everybody is talking and writing about NOLLYWOOD IN HOLLYWOOD. Hope you got tickets. For those outside Los Angeles, watch this space for how to watch live. #2019NOHO #nollywoodinhollywoodla #usc  #usccinema  #usccinematicarts #americancinemateque  #nollywood #nollywoodmovies  #nollywoodmovie #hollywoodstudios  #hollywood #losangeles #nigeria #africa  #africanfilm

A post shared by NollywoodinHollywood (@nollywoodinhollywood) on Mar 20, 2019 at 8:09am PDT

‘Nollywood In Hollywood’ is the brainchild of Nigerian-American filmmaker, Ose Oyamendan, which initiative is designed to expose ‘Nollywood’ films to the capital of the world’s entertainment industry.

Oyamendan said, “I look at it as a way of giving back to my country and broadening opportunities for Nollywood filmmakers and actors.

“Most people abroad know one side of Nigeria, the not-too-good side, now they get a chance to see another side and watch our stories.

“Thanks to our partners, Nollywood has the biggest audience in the world over the next few days”.

“We are thrilled that this event offers both our members and the larger Los Angeles film audience we serve, a window into Nigerian culture and filmmaking.”