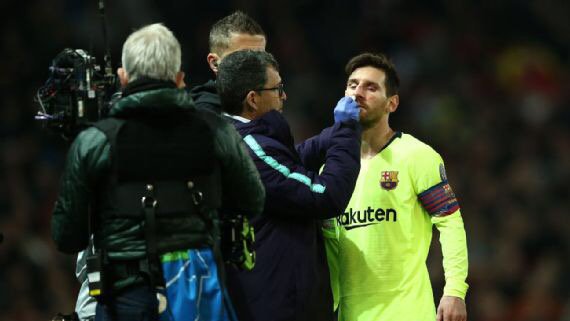 According to ESPN, Barcelona superstar player, Lionel Messi will miss his side’s clash with Huesca this weekend.

The Barcolona captain had blood on his face after a clash with Manchester United defender Chris Smalling.

Barcelona won 1-0 at Old Trafford to take a slim advantage into the second leg of the quarter-final at Camp Nou.

Further report revealed that Messi which suffered swelling around his nose will undergo tests on Thursday.

The club’s manager, Ernesto Valverde is expected to rest him against Huesca in their La Liga clash on Saturday.

Barca currently stands at 11 point clear of the second position on the table.