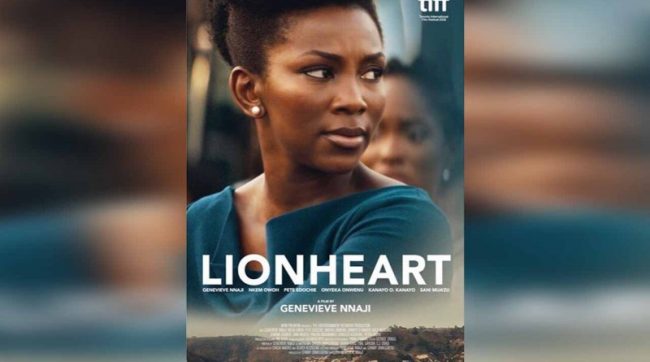 So I watched Lionheart this evening.

The cinema hall was empty. Less than twenty individuals.

I was sad to see this.

This is the first week of Genevieve Nnaji’s Lionheart, you’d expect people to be falling over themselves to see the movie.

The invisibility of Lionheart is quite visible. It stands out like a sore thumb amidst other cliquey cinematic rendezvous.

Even the worst kind of Nollywood sham parading as a movie still manages to carry a crowd – a crowd of people taking selfies, actors selling tickets, and forged numbers escaping the spaces in between their lying teeth as they proclaim “sold out”.

So why this lukewarm reception for Ms. Nnaji’s film?

Ms. Nnaji doesn’t seem like she wants to play the game. There’s no fanfare. No actors selling tickets at cinemas. Nothing

I doubt she would be allowed to express her brand with that much ease without judgment, seeing that the cinemas almost did not accept the movie.

READ ALSO: Secret of Finding and Keeping the Right Talents in Nigeria

The life of living and being Nigerian. Sigh.

Genevieve Nnaji deserves better from us.

But this is Nigeria.

I hope, in some ways, she is consoled by the fact that she is too good for the system.

Now to the movie…

The story is forgettable. But some scenes were priceless.

That scene at the dining table with the family was so heartwarming, I could feel my heart melt. They conversed only in igbo. It was authentic. It was rich. I loved it.

And there was the other scene where the two big men – Pete Edochie’s character and the Hausa man bantered in Hausa. Lovely.

Lionheart is not pretentious at all. I’m thankful for that.


Genevieve is not trying to appeal to your wokeness. I like how comfortable she explores the Igbo language and mannerisms and even the single story of the tribe. I like that they didn’t have to repeat the same thing in English when it was served in Igbo or Hausa.

She gathered her colleagues from old Nollywood proudly and made them share this moment with her. They all looked lovely. I was glad to see them on bigscreen (Hello, Kanayo! ?)

The movie could have been a setting in the 80s. Heck, 70s if you wish. The directing is timeless and the editing rid of every unnecessary flab. It was presented with just the right content and nothing more.

It turned out quite petite and pretty – just like Nnaji herself.

Let’s talk about how beautiful Genevieve is.

By jove! She is beautiful. The kind of beauty that isn’t afraid of anything.

She is a star. A worthy export.

Lionheart is not a comedy. I wish they’d stop promoting it as such.

It is witty. It will make you chuckle. And you will wear many smiles through it all. But it is not a comedy.

I understand what Genevieve tried to do with the script. I know what she was trying to achieve. I am not sure if she achieved it. But her potential is glaring and very commendable.

The scenes were too dark. Everything was dark. Even daytime was dark. It’s as if the Nigerian soot took over the shots.

It was a very slow movie. I was waiting for a climax – the big bang! The unbelievable moment.

Nonetheless, Lionheart is not a regular Nollywood movie. The uncle did not become the enemy of the older brother. He didn’t have a hidden agenda. I am so glad that they saved us that cliché.
.

There are some things you must do because it is the right thing to do.

You must go see Lionheart… it is a good movie. See it to support the most incredible actor this country has. It is the right thing to do.

An actor who has nurtured her brand for decades and still remains as flawless as an exotic bloom.

Go see it for the culture.

See Lionheart as your investment into Genevieve Nnaji’s worthy brand.

She deserves our love and support.