Iyabo Ojo Celebrates Her Nephew On His Matriculation 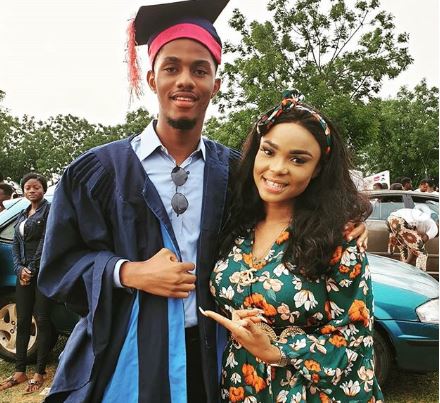 Nigerian actress, Iyabo Ojo, is celebrating her brother’s son, Mathew as he celebrates his matriculation.

The actress in the atmosphere of celebration wrote on how she once breastfed her Nephew when his mum’s breast refused to produced milk. She wrote;

“This handsome dude is my nephew, my brother’s son…. but I call him my son because we share a mother & son relationship. I try not to steal the spot from his biological mum but today I just have to let you all know that I don’t have two kids but many.”

SEE ALSO: Cristiano Ronaldo Shows Off His Body As he strips for Men’s Health Magazine

“My heart is filled with so many emotions, memories & above all gratitude to God. His mum had him 17 and a half years ago, at first he wouldn’t latch, when he did the mum’s breast refused to produce milk. We bought different types of milk but he kept throwing up.”

“It became obvious that he’s lost significant weight in two weeks. At this point, I decided to take charge, told the mum my intention and seek consent. He was brought to my house and I started breastfeeding him. (Priscy was six months old and still breastfeeding).”

“Of course, aunty Priscilla @its.priscy couldn’t understand why mum was sharing her booby �, she would hit, pinch and cry her eyes out each time I breastfed Mathew.”

“A lot happened after and Mathew continued to stay with me. It’s not been easy solely raising them all but today seeing Matthew and attending his matriculation, I feel blessed and happy that I got the parenting skills right.”

“Yes, I have failed in different ways but God has been so faithful to me and my household. The tears wouldn’t stop…. oh no, they are that of joy and fulfilment. @matto_xo I have witnessed today, may I witness your graduation and many more, please face your studies & never forget to always put God 1st, I love you & the rest of you….. congratulations son……. Mummy ”