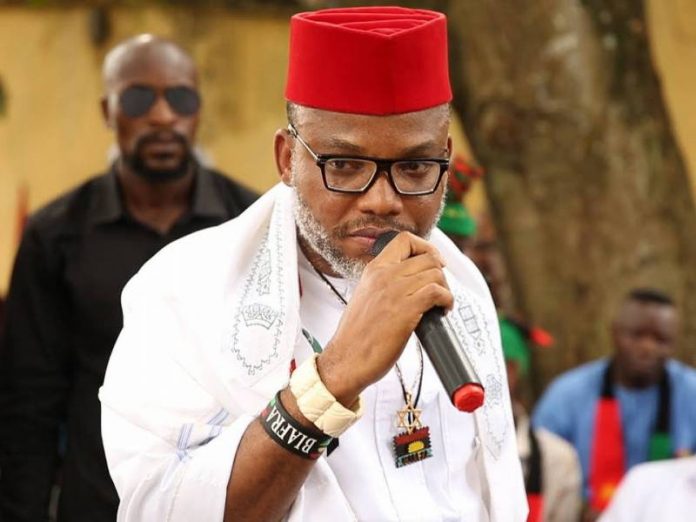 Ahead of the forthcoming election, the Indigenous People of Biafra, on Friday revealed how Nnamdi Kanu stopped South East governors from rigging election in favour of President Muhammadu Buhari.

In a statement signed by its spokesperson, Emma Power, the secessionist group claimed that “Igbo governors” are unhappy with Kanu for lifting the ban and has ordered a clampdown on its members.

“We the Indigenous People of Biafra (IPOB) and it’s leadership worldwide consider it imperative to put the civilized world on notice concerning the incessant harassment, abduction, arrest and torture including house to house search for innocent and unarmed civilians in Aguata, Orumba North and South Local Government Areas of Anambra State and other states like Abia and Ebonyi where their governors have continued to use the authority of their office against anybody seen or regarded as an IPOB family member or sympathiser.

“Since our leader, Mazi Nnamdi Kanu lifted the ban on election boycott on Thursday night in the whole of Biafraland, Willie Obiano of Anambra State and other Igbo states governors subservient to Fulani caliphate and beholden to Jubril-Buhari have intensified their clampdown on IPOB through illegal midnight raids and kidnapping.

“We are fully aware that most of Igbo governors are not happy with IPOB because their previous strategy of using our election boycott as cover to rig the vote in favour of Jubril-Buhari, particularly in Anambra State where Willie Obiano has instructed the Fulani Muslim dominated Nigerian Army and police to deploy into our villages to abduct and kill anybody who is perceived to be against voting for Jubril-Buhari and APC in the state.

“We are calling on the chattering class and people who may come in defence of Willie Obiano in the future to take cognisance of what he is doing to innocent men, women and their families in the name of serving his Fulani masters.

“His associates should caution him about the inevitable consequences of tampering with innocent law-abiding families in Anambra State because when we start with him, let his hired praise singers not say they were not warned in advance.

“Those condoning this evil by Obiano will be the first to blame IPOB any day we choose to confront Obiano. Let this press statement serve as a warning and reminder of what will befall Obiano in months to come.”

Falana Speaks On What Atiku Should Expect In Court
Buhari govt orders CJN Onnoghen to vacate office, to arraign him over asset declaration
Akwa Ibom to launch own airline – Udom Emmanuel
New IGP Gets Shortlisted By Buhari
Nnamdi Kanu 2