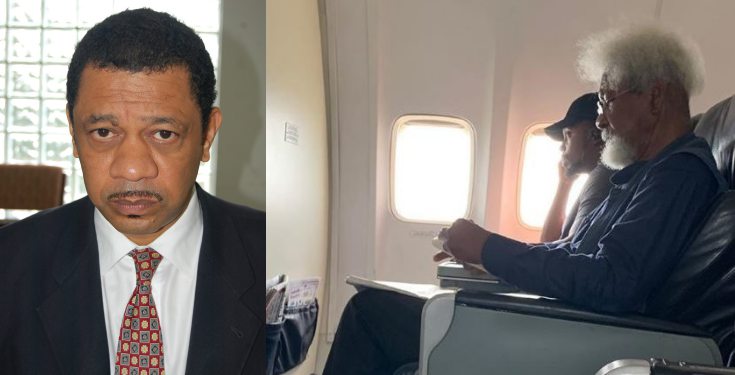 Professor Wole Soyinka, eldest son has joined the online debate about the involvement of his father in a plane saga.

The matter has been trending to days now.

The Noble Laureate son however explained his side of the story in a letter to Tony Cole.

“I am writing to thank you for standing up for my father, and for respect. You ignited a social media storm that appears to have had even more impact on aviation matters than Iran’s recent downing of the USA drone. Prof Soyinka’s inadvertent trespass into someone else’s ‘seatspace’ has triggered numerous unguided missiles which are flying all over social media.”

“My dad travels a lot and at his age we, his offspring, have been advising him to cut down. I hope if l get to his ripe old age I will still be as independent as he is, though he does have the occasional mishap I’m sure this is not the first time he’s occupied the wrong seat. It’s not a big deal and most frequent flyers have done it. I’ve not asked him yet, but if it was deliberate then, as my wife points out, he was probably trying to keep away from the aisle to avoid the inevitable ‘go-slow’ as people stopped to shake his hand. Most likely it was mere preoccupation with other matters.”

“The young man whose seat it was may have had a specific reason to insist on having his seat. He was within his rights, and WS would be last person to make an issue of it. My irritation, however, is reserved for the social media warriors.”

“Some vehemently defended the right of the young man to claim his seat. They hailed him for bravely standing up to oppression and divined how a young WS himself might have reacted in a similar situation. (He is an activist but a gentleman, so it is most likely he would have graciously given way to an elder who mistakenly sat in his seat). Some criticised WS for attempting to callously deprive a youth of the fruits of his hard-earned money. One wag even suggested he might as well have insisted on having the pilot’s seat.”

“Others castigated your good self for mentioning the t-shirt and tattoo. They poured venom on the passengers who dared to suggest that Prof should have been allowed to stay where he was. Thus, online, the non-drama transformed into a tragicomic metaphor for the problem of Nigeria. Soyinka representing, to some lazy thinkers, the oppressive ruling class that has laid waste to the country, now trying to deprive the young of their dues even in the confines of an airplane cabin. The deprived seat-owner meanwhile representing our virile but dispossessed young Nigerians, angry and determined to grab and hold on to whatever they can. Not prepared to give an inch, or deference, to any venerable agent of the wasted generation. The cabin controversy had gone from local to international.”

“Do our online youths these days see it as a badge of honour to avoid the courtesies that we traditionally extended to our elders? Why do they insist on jumping to the most uncharitabie conclusion? (‘It was deliberate. WS commandeered the seat’.) Why did people insist on misinterpreting the events? Can’t an elderly man make a mistake?”

“I believe the learning point of this controversy lies in understanding the difference between right and entitlement. The seat owner had a right that is enforceable. But the elder though he or she is entitled to some deference and respect, can only hope for it. In this case it was not given and WS, unhesitatingly moved seat.
To the online outraged, I would point out that those who like to see an elder given his due deference are entirely within their rights to judge the young man. And if they decide to add some profiling (the t-shirt, tattoo, face cap), please just ‘chop it’ He passed up a small opportunity to bestow an act of kindness, and commentators happily pointed out his emblems of youthful disregard for convention. Afterall, he had just disregarded a convention that many hold dear.”

“Extending courtesies based upon age such as offering your seat in a crowded bus or lifting a heavy bag is not just a matter of convention or kindness but common sense. We will all become that person: a bit more frail every passing year, a little unsteady, occasionally absent minded, frustratingly blurred of vision. We will inevitably need to rely on considerate fellow passengers or observant bystanders. We hope they will anticipate and help. The future seems far away for youths, but soon enough it will be today’s young ones who are the elders. They may one day have to struggle to their feet to make way for youths bent on claiming their rights.”

“I have not commented on the fact that beyond being an elderly man, WS has served his country in a way that many would do well to emulate. I will leave that for others to go into. Our garrulous online youths however, should not take freedom of expression for granted. In his day, the dictator Abacha tightly controlled the then novelty called the internet. People spent decades in jail, being tortured for merely hinting at criticism of the military ruler. Our freedom to hold our leaders accountable is a precious right bought by the heroism of many; some died, some are still living. 50, as you fight your battles of today, please do so with a sense of history.”

“On that historical note I will finish with an anecdote about Wole Soyinka and another airline seat. He returned from exile to Nigeria in 1998 for the very first time after Abacha’s demise. Although he had departed in secret four years earlier on the back of a motorcycle along a forest path, he returned home more publicly by plane. His first-class seat was given to him, free, by KLM. I know this because l arranged it. After explaining the situation to a senior manager, the airline did not hesitate to offer to fly him back on that momentous occasion. I accompanied him on the flight and proudly watched as grateful and admiring compatriots made their way up the aisle to get a glimpse of him or to thank him for his steadfast years-long role in opposing the military junta at great personal cost. Not all the cabin crew were aware of the intricacies of Nigerian politics and the historic nature of the occasion. The commotion soon got the message through and then even l got the VIP treatment (i.e. endless Champagne). I’m sure if WS had insisted on sitting in the pilot’s seat they would have obliged.

“Soyinka was given respect freely he had not demanded it, he earned it. On landing, the joyous, singing throng that met him at the airport arrivals hall was a sight that I will never forget. Now he was seated shoulder high.”

“I recount this not as a boast. Rather, as a reminder to our young online activists that respect for our senior citizens is also about history you just don’t know the story behind the seats your elders have occupied, even before you were born.”

Loading...
Newer Post
This is not the time to talk about Neymar’s return – Barca Vice President
Older Post
Why I claimed to be young man that had an encounter with Nobel laureate – Tosin Odunfa