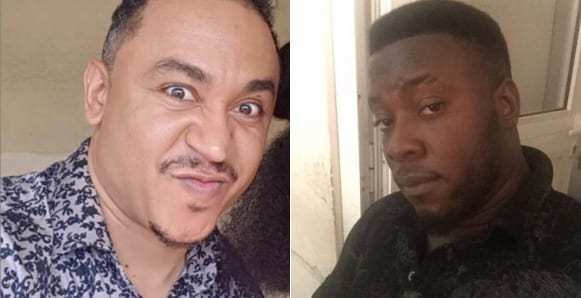 Controversial On-Air Personality, Daddy Freeze has called out an online troll who did not agree with his view and also called him “She-pig”.

Daddy Freeze recently called out the general overseer of the Redeemed Christian Church Of God, Pastor Adeboye for claiming that he had a coffee with God.

Freeze while reacting to the trending story that a church got burnt but the Bibles found in the building didn’t get burnt, he wrote;

“Well some parts of the word of God can be found in the Bibles, while the church itself is NOT the house of God, hence why the building burnt but the scriptures didn’t! ~FRZ”

Freeze why reacting to the call out said;

“There’s no such thing as a she pig, it’s a ‘gilt’ or ‘sow’, if u spent the time u are using to attack me studying, perhaps you won’t be the custodian of such gross ignorance. You don’t know me, so how can I be the most jobless person you know? Confused, penury infested dingbat”