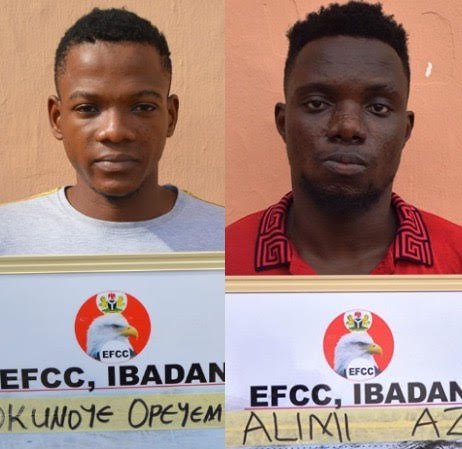 The EFCC has confirmed that it had secured the conviction of four internet fraudsters.

While three of the convicts, Alimi Azeez Oluwadamilare, Paul Opeyemi Omotunde and Igberase Hope Odianosen, were tried in the Federal High Court, Abeokuta Division, while the other, Okuneye Opeyemi James, was tried the Ibadan Division of the court.

Alimi, is a member of the NYSC, and Omotunde, a 2019 graduate of FUNAAB were convicted and sentenced to four months in prison.

Also in Abeokuta, Igberase was sentenced for four months.

Investigations by the Commission revealed that the convict’s modus operandi was to illegally hack into people’s accounts to gain unrestricted access to vital and sensitive information, and covert same to fraudulent use.

Gokada, Gokana and a Custodian’s Cause
Samuel Ortom Speaks On INEC Declaring Benue State Election Inconclusive
Osun head of hunters freed by kidnappers
Ohanaeze Speaks On Why Nigeria May Burn