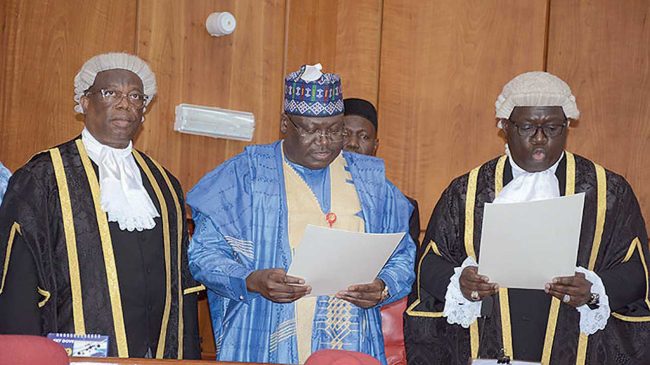 Are you looking for Ahmed Ibrahim Lawan Biography, Religion, Family or Awards?

On the eve of Nigeria’s new democracy day commemoration, June 12, history was made at the Upper Legislative Chambers of the National Assembly when Senator Ahmed Lawan of Yobe North Constituency was elected President of the 9th Senate on Tuesday, June, 11.

Who is Ahmed Ibrahim Lawan?

Ahmed is of the ruling All Progressive Congress, APC and is a seasoned parliamentarian with over 20 lush years of experience in lawmaking.

He defeated contender, Senator Ali Ndume of same APC after polling 79 votes while Ndume managed to secure 29 votes in a secret ballot election held on Tuesday afternoon at the Senate Chambers.

The Senator representing Yobe North Constituency has been elected as the senate president of Nigeria’s National Assembly under the platform of the ruling All Progressives Congress (APC).

He is the 14th president of the senate.

He has been a lawmaker since the return of democracy in 1999 as a representative of northern Yobe at the House of Representative and at different times Mr Lawan chaired the House Committees on education and agriculture.

By 2007, he was elected as Senator and later became a member of the National Assembly’s Joint Committee on Constitution Review in 2008. He was the chairman of the Senate committee on Public Accounts in 2009.

Mr Lawan was again re-elected as senator on April, 9 2011 elections with 92,799 votes against his closest rival, Hassan Kafayos Hussaini of the People’s Democratic Party (PDP) with 76,960 votes.

Despite the fact that he was supported by the presidency and the APC for the position of Senate President, he lost to Bukola Saraki who connived with the opposition.

He later served as the Majority Leader in the 8th assembly.

We present to you the profile of Nigeria’s new Senate president, Mr. Ahmed Lawan.

Below is Ahmed Ibrahim Lawan Biography

Senator Ahmed Lawan was birthed in the year 1959, precisely on the 12th of January in Gashua town, Yobe State, North East, Nigeria. 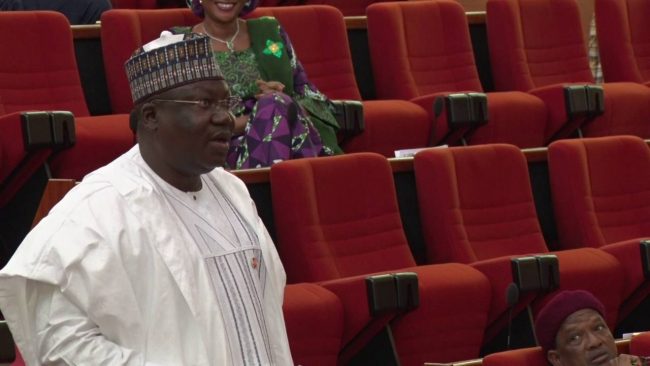 He had his primary school education at Sabon Gari Primary School in Gashua town and wrapped it up in 1974.

He would then proceed to the Government Secondary School, Gashua to obtain his O’Level certificate, which he did obtain in 1979.

The University of Maiduguri became his next port of call where he bagged a Bachelor’s degree in Geography from the institution in 1984.

After completing his mandatory one year service under the National Youth Service Corps (NYSC), he decided to push his educational career further by indulging in a Master’s Degree programme in Remote Sensing from the prestigious Ahmadu Bello University, Zaria which he completed in 1990 and then capped it up with a Doctorate Degree in same Remote Sensing from Cranfield University in 1996.

As it was in those days, bagging a degree meant you are entitled to some juicy positions in any sector where your discipline lies and most times even in non-related sectors.

He would later return to his alma mater (University of Maiduguri) in 1987 where he got his start as an assistant lecturer 1 in 1986.

He lecturing career would last for 10 years which ended in 1997 when he decided to venture into politics.

Mr. Lawan’s journey into politics began in 1999 when he was elected as a lawmaker in the House of Representatives to envoy for the Bade/Jakusko Federal Constituency under the platform of the All Progressive’s Party, APP.

He became the pioneering Vice Chairman of the APP in Yobe State and was re-elected under the same platform in 2003, making his stay at the House of Reps culminate into 8 years.

During his second tenure at the lower legislative chambers, he chaired the House of Representative Committee on Agriculture up until 2005 when he was then appointed again to lead the Education Committee of the House.

That position saw him through the end of his tenure at the green chambers.

Lawan in the Senate

After successfully serving as a lawmaker in the lower chambers of the National House of Assembly, Lawan thought it was time to level things up and so in 2007, he ran for the Yobe North Senatorial Seat under the APP which had then transformed into the All Nigerian People’s Party, ANPP.

While in the Senate, his knack for leadership which he displayed at the green chambers, reflected in the red chambers again when in 2009, he was appointed Chairman, Senate Committee on Public Accounts where he birthed the Desertification Control Commission Bill.

He was also a member of the National Assembly’s Joint Committee on Constitution Review.

When Lawan’s tenure as a senator ended in 2011, he yet ran again for the same position under the same platform in the April 2011 elections where he won again for the fourth time as a lawmaker, defeating Hassan Hussaini of the ruling People’s Democratic Party, PDP.

In 2014, his party, the ANPP, in coalition with two other parties; Actions Congress (AC) and Congress for Progressive Change (CPC) formed the All Progressives Congress (APC).

With the APC, Lawan ran again for the Senate in 2015 for the same Yobe North Senatorial Seat and coasted to victory again which he was now used to.

Lawan and the Senate President Lost Chance in 2015

Lawan’s chances of becoming Senate President in 2015 was thwarted in one of the most enthralling dramas of the red chambers.

He was handpicked as the sole candidate of the APC to contend for the Senate presidency and since the APC was in the majority, naturally, all odds were in his favor even as he looked forward to assuming the position seamlessly.

However, fate had something contrary looming for the distinguished veteran lawmaker when on the designated day of the elections, Senator Bukola Saraki and some fifth columnists senators stormed the National Assembly Complex in Bravado style, armed with mobile police men who had cordoned off the area, barring reporters form gaining access to the locus of the situation.

Saraki and some 57 treacherous senators, most of them of the opposition PDP fold, held a swift election where He; Saraki was voted in as Senate President of the 8th Assembly.

Meanwhile, these turn of event transpired under the noses of some APC senators who were at the International Conference Center, Abuja, waiting for the President to come to address them prior to the commencement of the elections.

Thus, Senator Ahmed Lawan was robbed off his chance of becoming the Senate President.

Lawan in 2019 as Senate President

Call it a reward for tenacity and perseverance or perhaps one of the most deserving compensations in the annals of legislation in Nigeria, whichever you choose, in 2019, Lawan was again at the verge of the Presidency of the 9th Senate after having being choosen by the ruling party, APC to lead the Senate.

He had two contenders who believed in a level playing ground accorded to all lawmakers to vie for the position.

They were Senator Ali Ndume, former Senate leader, who after a fall out with the party, was ousted and replaced with Mr. Lawan and then Senator Danjuma Goje, who opted out of the race a week to the elections.

Senator Ahmed Lawan is a recipient of many prestigious awards which includes;

Senator Ahmed Lawan is married with children and is a Muslim.