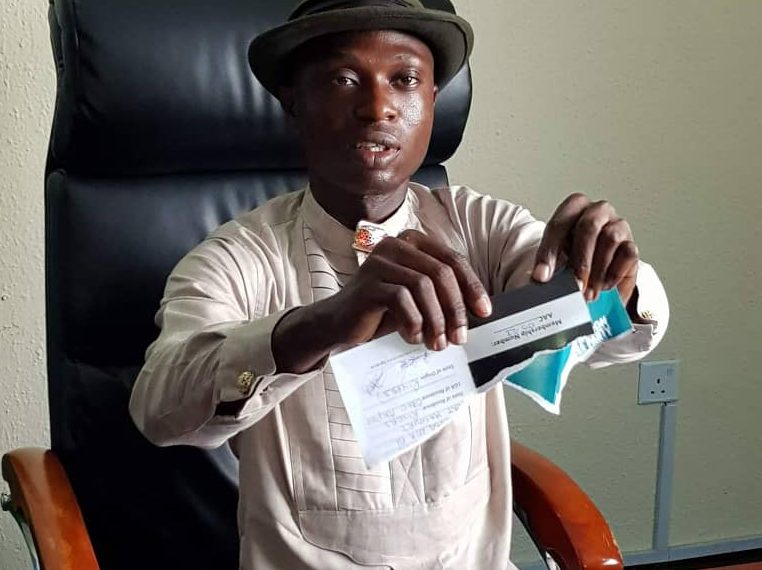 The Deputy Chairman of the African Action Congress in Rivers State, Amezhinim Atuma has defected to the Peoples Democratic Party.

Recall that Hy Naija reported that the deputy governorship candidate of the party, Akpo Yeeh also dumped the party for PDP.

The AAC Deputy Chairman while speaking in Port Harcourt announced his defection and thereafter tore his AAC membership card.

He condemned the All Progressives Congress for allegedly using the security operatives during the Governorship election.

The Nation quoted him as saying: “As at March 27, 2019, every arrangement has been made to disrupt the collation and announcement of the governorship and House of Assembly elections’ results, as scheduled by the Independent National Electoral Commission (INEC) between April 2 and 5, 2019.”

“There are plans to cause bloodshed, leading to total breakdown of law and order between April 1 and 5, 2019.”

“This is in furtherance of their plan to create a state of emergency in Rivers State, wherein Governor Wike’s term in office would have expired.”

“The petition filed against the Resident Electoral Commissioner (REC) of INEC in Rivers State, Mr. Obo Effanga, and the Chairman of the electoral commission, Prof. Mahmood Yakubu, by the defeated AAC’s governorship candidate (Awara) contains the same false allegations with his suit at the Federal High Court in Abuja.”

Atuma further revealed that the affidavit sworn by Yeeh was true and from another source within AAC, Wike won the state’s governorship election.

“Our (AAC’s) party agents inundated us with information from across Rivers State that the PDP won the governorship and House of Assembly elections.”

“There is a sinister plot by members of the AAC and APC to rig the 2019 elections in Rivers State and subvert the will of Rivers people.”